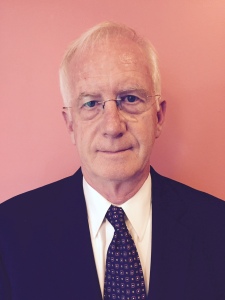 As a young, deaf law student who communicated via sign language, Robert Mather (JD ’77) faced attitudinal barriers. He wanted to become a trial attorney but encountered some resistance from lawyers and friends. “Some people thought I could not be a trial attorney because I was deaf and use sign language,” Mather remembers. “At the time, I was not sure if I could becomea trial attorney, but I felt must try. I would not accept what other people told me to be or not to be.” Relying on guidance from an adjunct professor and an experienced trial attorney, Mather and his team successfully won a mock trial. “My experience with the instructor and team members’ support proved that it was possible to become an effective trial attorney,” Mather asserts. “Deafness to me was not an issue.”

His record over the past 31 years speaks for itself. Mather has been a trial attorney in the Disability Rights Section (DRS) of the Civil Rights Division of the Department of Justice since 1984. DRS is responsible for the enforcement of titles I, II and III of the Americans with Disabilities Act (ADA). Passed in 1990, the ADA prohibits discrimination on the basis of disability, and Mather was a member of the legal team that developed the regulations for titles II and III of the ADA. These regulations explore nondiscrimination, especially in state and local government services, as well as by public accommodations and in commercial facilities. “The common denominator is that I work on cases where private entities and state and local government agencies failed or refused to make changes whenever necessary to provide individuals with disabilities the same opportunities that are provided to others,” says Mather.

Among the changes he has facilitated are the removal of barriers in facilities, reasonable modifications in policies and practices, and the provision of appropriate auxiliary aids and services to ensure effective communication. Mather has received multiple achievement awards from the Department of Justice for his efforts and previously served as staff counsel of the U.S. Commission on Education of the Deaf, deputy general counsel of the U.S. Architectural and Transportation Barriers Compliance Board, and a VISTA attorney at the National Center for Law and the Deaf. “I know, after 30 years, we have witnessed a great deal of progress in disability rights in the areas of employment and public and private services,” Mather says. “But, like other federal civil rights laws, there is so much work to be done under the ADA.”

Mather credits three elements of his DePaul experience with preparing him for his future success: trial practice in a moot court, the relationships he formed with his professors and classmates, and the instruction and guidance he received in legal writing. “Professor Terrence Kiely (JD ’67), my tort instructor, called me to discuss with him how to prepare for a final exam,” Mather recalls. “He asked me if I had developed an outline yet. I asked, ‘Outline for a final exam?’” Kiely explained the importance of outlines to prevent last-minute studying, and Mather immediately took his advice. After that, there were “no last minute crams” for Mather, and that made all the difference in his studies. “DePaul prepared me for the rigors of my career in civil rights enforcement,” Mather affirms.

The DePaul Art Museum has gained a nationally recognized curator of contemporary art as its new director. Julie Rodrigues Widholm comes from the Museum of Contemporary Art (MCA) in Chicago, where she has spent the last 16 years overseeing three to seven exhibitions annually. Throughout her career, Widholm has curated more than 50 exhibitions at the MCA, including major shows such as “Doris Salcedo,” the first museum retrospective for the Colombian artist.

Widholm earned bachelor’s degrees in art history and political science from the University of Illinois Champaign-Urbana and a master’s degree in art history, theory and criticism from the School of the Art Institute in Chicago. When she began her career at the MCA, she rose through the ranks from a research assistant to assistant curator and associate curator before beginning her current role in 2012. Throughout her career, she has earned a reputation for highlighting the work of emerging and local artists by curating dozens of 12×12: New Artists/New Work exhibitions. Her breakthrough exhibition “Escultura Social” brought work from young artists in Mexico City to Chicago for the first time. Additionally, she organized the first major solo exhibition for Rashid Johnson, which toured to Miami, Atlanta and St. Louis.

In addition to her curatorial work, Widholm has raised as much as $1.5 million from private donors to support exhibitions, and supports women and Latin American artists, such as Amalia Pica, whose first major American solo exhibition, she co-organized with MIT List Visual Art Center.

Widholm will step into the position held on an interim basis by Laura Fatemi, associate director of the museum. Fatemi succeeded Louise Lincoln, who served for 17 years as director. Widholm will begin her new role at DePaul on Aug. 31.