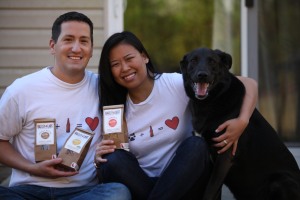 Scott Beaudry and Theresa Chu (CMN MA ’09) take turns in the kitchen, baking furiously to keep up with demand for their all-natural, preservative-free dog treats. All the while, Barley, their 5-year-old lab mix, waits patiently to perform her duty as vice president of quality control. “She’s been our taste tester from the very beginning,” says Chu. “Granted, eating is one of her favorite past times so I’m not sure how discerning of a palate she has, but she loves them.” The treats come in three flavors—cheese, peanut butter and pumpkin—and each has been carefully vetted by Barley herself. “We knew she liked them when we’d give her those first trials and she ate them up immediately,” Chu recalls. “We knew we were on the right track.”

Barley Labs was born out of a desire to reduce waste. Beaudry had started home brewing and was looking for ways to recycle used barley when he stumbled upon a recipe for dog treats. After months spent painstakingly tweaking recipes, Beaudry found the perfect balance, and he and Chu started distributing dog treats to family and friends. “For us, it was all about using ingredients that people understood right off the bat,” Chu explains. “There are basically four ingredients: spent grain, egg, flour and the main flavor component. When you read it, you know exactly what’s going into your dog.”

By September 2012, Barley Labs was in full swing, thanks in large part to the spent grain donated by Fullsteam Brewery in Durham, N.C. Today, the company’s treats are available in 49 retail locations in seven states, as well as online at barleylabs.com and wag.com. “Barley has been a huge part of our lives,” Chu says. “It’s hard to imagine life without her, so we donate 10 cents from every bag we sell to our local shelter in Durham. This year, on the anniversary of Barley’s adoption [March 7], we donated a dollar from each bag sold on our website to PAWS Chicago.”

Chu uses many of the skills she learned at DePaul in the day-to-day operations of Barley Labs. “DePaul gave me a well-rounded view of marketing, public relations and advertising that I apply to my business,” she asserts. “Those basic, core principles that I learned at DePaul had an impact on the way we built Barley Labs.” From creating branding to publicizing it effectively, Chu credits DePaul with preparing her for the realities of running her own business. “I’m still learning every day,” she says. “I make mistakes and not everything is perfect, but at the very least having that foundation gives me the confidence to make informed decisions.”

She entered the Intuit Small Business Big Game contest to win a Super Bowl XLVIII commercial on a whim, the public-relations professional in her deeming it “silly” not to at least try. “We didn’t think we’d make it far,” she remembers. Weeks passed, and Barley Labs remained in the running, ultimately making it to the top four. While they didn’t win the Super Bowl commercial, Barley Labs received a national commercial and $25,000 for their business. “We might not have won the big prize, but it certainly still feels like we won,” Chu laughs. Thanks to the contest, Barley Labs’ sales have jumped more than 100 percent, accelerating the growth of their business five years in just a few months. “We never expected this business to be anything more than a small, local dog treat business,” she stresses. “We’re incredibly grateful.”